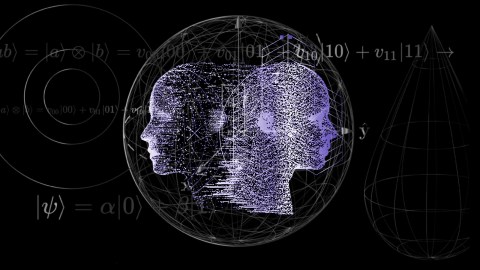 Supercomputers can beat us at chess and perform more calculations per second than the human brain. But there are other tasks our brains perform routinely that computers simply cannot match — interpreting events and situations and using imagination, creativity, and problem-solving skills. Our brains are amazingly powerful computers, using not just neurons but the connections between the neurons to process and interpret information.

And then there is consciousness, neuroscience’s giant question mark. What causes it? How does it arise from a jumbled mass of neurons and synapses? After all, these may be enormously complex, but we are still talking about a wet bag of molecules and electrical impulses.

Some scientists suspect that quantum processes, including entanglement, might help us explain the brain’s enormous power, and its ability to generate consciousness. Recently, scientists at Trinity College Dublin, using a technique to test for quantum gravity, suggested that entanglement may be at work within our brains. If their results are confirmed, they could be a big step toward understanding how our brain, including consciousness, works.

Quantum processes in the brain

Amazingly, we have seen some hints that quantum mechanisms are at work in our brains. Some of these mechanisms might help the brain process the world around it through sensory input. There are also certain isotopes in our brain whose spins change how our body and brain react. For example, xenon with a nuclear spin of 1/2 can have anesthetic properties, while xenon with no spin cannot. And various isotopes of lithium with different spins change development and parenting ability in rats.

Despite such intriguing findings, the brain is largely assumed to be a classical system.

If quantum processes are at work in the brain, it would be difficult to observe how they work and what they do. Indeed, not knowing exactly what we are looking for makes quantum processes very difficult to find. “If the brain uses quantum computation, then those quantum operators may be different from operators known from atomic systems,” Christian Kerskens, a neuroscience researcher at Trinity and one of the authors of the paper, told Big Think. So how can one measure an unknown quantum system, especially when we do not have any equipment to measure the mysterious, unknown interactions?

Quantum gravity is another example in quantum physics where we do not yet know what we are dealing with.

There are two main realms of physics. There is the physics of the tiny microscopic world — the atoms and photons, particles and waves that interact and behave very unlike the world we see around us. Then there is the realm of gravity, which governs the motion of planets and stars and keeps us humans stuck to Earth. Unifying these realms under an overarching theory is where quantum gravity comes in — it will help scientists understand the underlying forces that govern our universe.

The researchers scanned 40 subjects with an MRI. Then they watched what happened, and correlated the activity with the patient’s heartbeat.

The heartbeat is not just the motion of an organ within our body. Rather, the heart, like many other parts of our body, is engaged in two-way communication with the brain — the organs both send each other signals. We see this when the heart reacts to various phenomena such as pain, attention, and motivation. Additionally, the heartbeat can be tied to short-term memory and aging.

As the heart beats, it generates a signal called the heartbeat potential, or HEP. With each peak of the HEP, the researchers saw a corresponding spike in the NMR signal, which corresponds to the interactions among proton spins. This signal could be a result of entanglement, and witnessing it might indicate there was indeed a non-classical intermediary.

“The HEP is an electrophysiological event, like alpha or beta waves,” Kerskens explains. “The HEP is tied to consciousness because it depends on awareness.” Similarly, the signal indicating entanglement was only present during conscious awareness, which was illustrated when two subjects fell asleep during the MRI. When they did, this signal faded and disappeared.

Seeing entanglement in the brain may show that the brain is not classical, as previously thought, but rather a powerful quantum system. If the results can be confirmed, they could provide some indication that the brain uses quantum processes. This could begin to shed light on how our brain performs the powerful computations it does, and how it manages consciousness.