Fidelity Charitable, the nation’s largest grantmaker, is getting into NFTs or nonfungible tokens despite a torrent of bad news about cryptocurrency companies 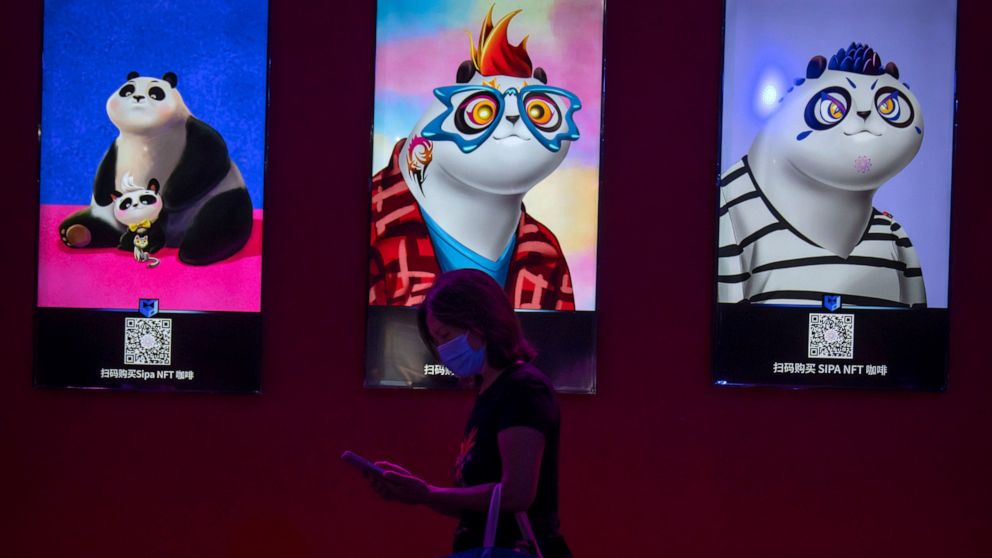 FILE - A visitor wearing a face mask walks past artwork displayed at an NFT (non-fungible token)-themed coffee shop at the China International Fair for Trade in Services (CIFTIS) in Beijing, Sept. 3, 2022. Fidelity Charitable, the nation's largest grant maker, is getting into NFTs, the digital images that are registered on the blockchain, despite a torrent of bad news from adjacent world of cryptocurrencies. (AP Photo/Mark Schiefelbein, File)
The Associated Press

NEW YORK -- Fidelity Charitable is getting into NFTs, the digital images that are registered on the blockchain, despite a torrent of bad news from the adjacent world of cryptocurrencies.

The nation's largest grantmaker is sponsoring a raffle that ends Tuesday, where participants can claim one of the NFTs, which stands for nonfungible token, and 50 will win $1,000 to donate through a donor advised fund at Fidelity.

“The reason we’re doing this is we really believe there’s a whole new generation of givers and philanthropists out there,” said Amy Pirozzolo, head of donor engagement for Fidelity Charitable. “We want to be where they are and the channels they use and the formats they use and further encourage their generosity.”

Around 16% of Americans say they invested in cryptocurrencies, according to a poll from Pew Research Center last year. The demographic most likely to invest were men between the ages of 18 and 29, with 43% reporting that they had invested.

The blockchain is the technology that underlies the trading of cryptocurrencies, but it can also record the ownership of digital items like images, videos or Tweets. Fidelity said that 50,000 different wallets, potentially representing that many individuals, have already registered to create an NFT and potentially win the money to donate.

Contributions in cryptocurrency to donor advised funds at Fidelity exploded last year, growing from the equivalent of $28 million in 2020 to $331 million in 2021, Fidelity has said.

Speaking of the NFT project, Jacob Pruitt, president of Fidelity Charitable, said, “I think it’ll be a unique way to engage with next gen investors. It’s another way that I think Fidelity is innovating and leaning into a new space.”

Donor advised funds allow donors to claim a tax credit for charitable donations, but do not require them to give those funds away within any specific timeframe. Organizations that host DAFs, like Fidelity Charitable, also handle more complex donations, which includes exchanging the assets for cash and producing receipts for donors for tax purposes.

“Many of the nonprofits either can’t take on these assets or they have to hire outside counsel or people to staff to do it,” Pirozzolo said.

One reason for the jump in cryptocurrency donations is that until recently, their value had appreciated significantly. The cryptocurrency market saw a huge boom in 2021 with the price of Bitcoin, the first cryptocurrency, rising to an all time high of around $68,000 in November last year.

But the meltdown of Terra — a stablecoin, or a type of cryptocurrency that tries to peg its value to an asset like the U.S. dollar — in May brought down a series of major cryptocurrency businesses. Then, earlier this month, one of the largest cryptocurrency exchanges, FTX and related entities, suddenly filed for bankruptcy leaving both American and international users unable to access assets they held on the exchange.

James Lawrence, co-founder and CEO of Engiven, which facilitates cryptocurrency to nonprofits, including Christian ministries, observed that many people giving cryptocurrencies are making major gifts and that often those happen in the last quarter of the year. That means it's too early to say how the cryptocurrency market's fluctuations may impact donations this year. He said he doesn't see people donating cryptocurrencies as that different from other donors.

“They just have a different asset to give and they’re going to give the most appreciated asset they can,” Lawrence said.

Of the more than 1.5 million nonprofits registered with the Internal Revenue Service in the U.S., Lawrence estimated that only four or five thousand could receive cryptocurrency donations directly.

“Many of the largest gifts we’ve processed have been from an older demographic who have a tradition of giving large gifts in multiple asset classes,” he said.

“This is a leapfrog opportunity for nonprofit organizations to move from paper checks" to cryptocurrency Heeger said. “And the crypto space is very focused on adoption flywheels, on ways to incentivize or encourage the traditional economy to migrate into the crypto economy.”

He encouraged newcomers to the cryptocurrency space to carefully research projects they might get involved with and to look for ones that have gotten outside audits from professional auditors.

Pirozzolo argued that the Fidelity Charitable promotion using NFTs is separate from the cryptocurrency ecosystem.

“This is really about the blockchain and having a fun way to celebrate with digital art the generosity of giving,” she said.

The company is paying for the cost of creating the NFTs, which includes a “gas” fee that pays for the creation and registration of the item, and also said that it has compensated the artists who made the images.

People who claim the NFTs will need to sign up for a cryptocurrency wallet that has access to the Polygon blockchain. The Fidelity Charitable NFTs will be hosted on the platform OpenSea.

Participants will see the NFT in their wallet when they sign up, but the art itself and the winners of the $1,000 tickets won't be revealed until Giving Tuesday, Nov, 29.

Associated Press coverage of philanthropy and nonprofits receives support through the AP’s collaboration with The Conversation US, with funding from Lilly Endowment Inc. The AP is solely responsible for this content. For all of AP’s philanthropy coverage, visit https://apnews.com/hub/philanthropy.

Project will distribute $50,000 to charity

BOSTON, November 16, 2022 – Fidelity Charitable, an independent public charity and the nation’s largest grantmaker, today announced “Art of Generosity,” an original non-fungible token (NFT) project designed to celebrate generosity in motion. This philanthropic collection is the latest example of Fidelity Charitable’s continued commitment to innovation in giving. The project highlights the power of generosity through the lens of art produced by 12 diverse photographers, illustrators, muralists, digital artists, and more.

To encourage individual acts of generosity, 50 participants in the mint will receive a “golden ticket” NFT, which will entitle holders to recommend $1,000 in donations via a Fidelity Charitable Giving Account to eligible nonprofits of their choosing. In total, the project will result in $50,000 of support to charities by Fidelity Charitable to community-selected charities, and the minting will be completely free.

NFTs are cryptographic holdings, such as artwork, on a blockchain with unique identification codes and metadata that distinguish them from each other. Participants will be able to mint two artworks, encouraging people to keep one for their own collections and share one with a friend. Art will be revealed and golden ticket winners announced on Tuesday, November 29. This date marks this year’s Giving Tuesday, a global generosity movement and day dedicated to giving back.

“For its entire history, Fidelity Charitable has been an innovator to grow giving, from pioneering the use of donor-advised funds, to eliminating the minimum to set up a Giving Account—all to democratize access to giving. We see the Web3 space as a new frontier to speak to a new audience to encourage and enable generosity, as we continue our work on Fidelity Charitable’s mission—to grow the American tradition of philanthropy,” said Jacob Pruitt, president of Fidelity Charitable.

The Fidelity Center for Applied Technology (FCAT)—a group within Fidelity Investments focused on technology research and development—consulted on the project.

"Fidelity Charitable has been a leader and innovator in connecting blockchain to philanthropy,” said Adam Schouela, head of emerging technology at FCAT. “The Art of Generosity NFT project continues that exploration of new opportunities.”

Twelve impact-minded artists, including Dalek, Nick Davis, Saphera Peters, Ishita Banerjee, Richard Zheng, Rachel Winter, and Nyla Hayes, have joined the project to showcase custom works of art. Within each work, the artist interprets what generosity means to them personally, resulting in a multifaceted collection that displays how giving can shape our lives and communities for the better.

“We hope participants will be inspired to reflect on the role of generosity in their own lives and take action as individuals to help create a more generous world—whether that is through the sharing of art, the sharing of kindness, or the sharing of resources with nonprofits in need of support,” said Amy Pirozzolo, head of donor engagement for Fidelity Charitable.

Participants can pre-register before November 22 to receive a free airdrop or participate in the free public mint starting November 22 at noon ET. The public mint will be open for one week, culminating with the art and golden ticket reveal on Tuesday, November 29. To learn more, visit the project website: generositynft.com.*

*By clicking this link, you are leaving fidelitycharitable.org and entering a third-party site.

Fidelity Charitable is an independent public charity that has helped donors support more than 357,000 nonprofit organizations with over $61 billion in grants. Established in 1991, Fidelity Charitable is rooted in innovation, from its launch of the first national donor-advised fund program to its facilitation of difficult-to-donate assets to its tech-forward giving platform. The mission of the organization is to grow the American tradition of philanthropy by providing programs that make charitable giving accessible, simple, and effective. For more information about Fidelity Charitable, visit https://www.fidelitycharitable.org.

No purchase or transaction necessary to participate the Fidelity Charitable Art of Generosity promotion. This Promotion is open to legal residents of the 50 United States and D.C., 18 years of age or older who possess a mobile device as of date of entry. Void where prohibited. Starts 12:00 p.m. ET on 11/22/22 and ends 12:00 p.m. ET on 11/29/22. For complete rules, go to www.generositynft.com. Sponsored by Fidelity Investments® Charitable Gift Fund.