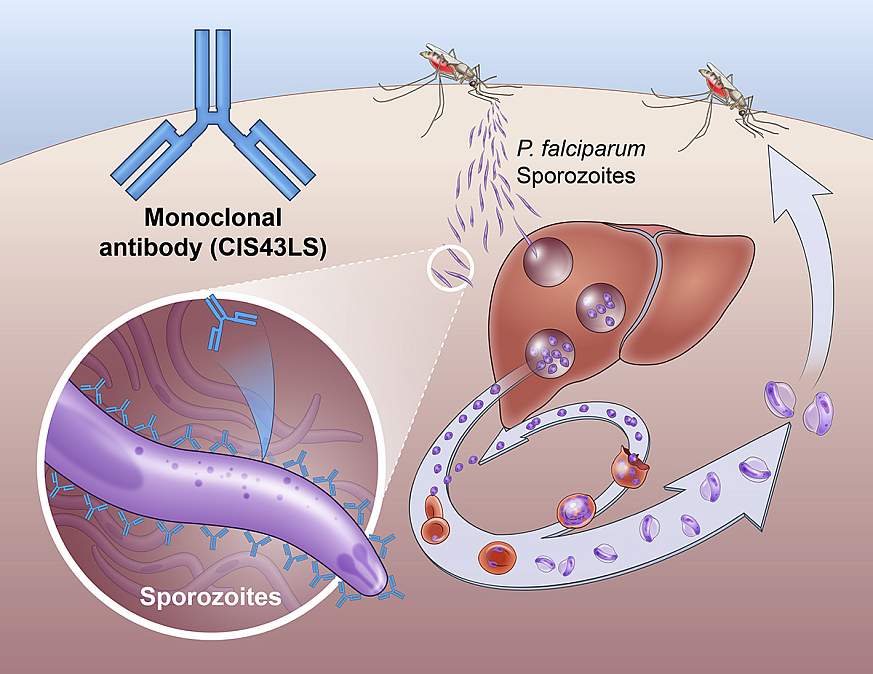 An antibody drug called CIS43LS prevents malaria infection by interrupting the lifecycle of the Plasmodium falciparum parasite. The antibody binds to and neutralizes sporozoites, the stage of the parasite transmitted from mosquitos to humans. NIH

One dose of an antibody drug safely protected healthy, non-pregnant adults from malaria infection during an intense six-month malaria season in Mali, Africa, a National Institutes of Health clinical trial has found. The antibody was up to 88.2% effective at preventing infection over a 24-week period, demonstrating for the first time that a monoclonal antibody can prevent malaria infection in an endemic region. These findings were published today in The New England Journal of Medicine and presented at the American Society of Tropical Medicine & Hygiene 2022 Annual Meeting in Seattle.

“We need to expand the arsenal of available interventions to prevent malaria infection and accelerate efforts to eliminate the disease,” said Anthony S. Fauci, M.D., director of the National Institute of Allergy and Infectious Diseases (NIAID), part of NIH. “These study results suggest that a monoclonal antibody could potentially complement other measures to protect travelers and vulnerable groups such as infants, children, and pregnant women from seasonal malaria and help eliminate malaria from defined geographical areas.”

NIAID sponsored and funded the trial, which was led by Peter D. Crompton, M.D., M.P.H., and Kassoum Kayentao, M.D., M.P.H., Ph.D. Dr. Crompton is chief of the Malaria Infection Biology and Immunity Section in the NIAID Laboratory of Immunogenetics, and Dr. Kayentao is a professor at the University of Sciences, Techniques and Technologies (USTTB) of Bamako, Mali.

The only malaria vaccine currently recommended by WHO, called RTS,S (Mosquirix), provides partial protection against clinical malaria during the early years of life when given to children aged 5 to 17 months in four doses over a 20-month period. Other drugs consisting of small chemical compounds that effectively prevent malaria infection are also available for infants and young children as well as travelers.The requirement for frequent dosing of these drugs can limit adherence, however, and the emergence of drug resistance may also limit their usefulness. Thus, there is an urgent need for new, fast-acting, infrequently dosed interventions that safely provide strong protection against malaria infection.

Malaria is caused by Plasmodium parasites, which are transmitted to people through the bite of an infected mosquito. The mosquito injects the parasites in a form called sporozoites into the skin and bloodstream. These travel to the liver, where they mature and multiply. Then the mature parasite spreads throughout the body via the bloodstream to cause illness. P. falciparum is the Plasmodium species most likely to result in severe malaria infections, which, if not promptly treated, may lead to death.

The Phase 2 NIAID-USTTB trial evaluated the safety and efficacy of a one-time, intravenous infusion of a monoclonal antibody called CIS43LS. This antibody was previously shown to neutralize the sporozoites of P. falciparum in the skin and blood before they could infect liver cells. Researchers led by Robert A. Seder, M.D., isolated a naturally occurring form of this antibody from the blood of a volunteer who had received an investigational malaria vaccine, and then modified the antibody to extend the length of time it would remain in the bloodstream. Dr. Seder is the acting chief medical officer and acting associate director of the NIAID Vaccine Research Center (VRC) and chief of the VRC’s Cellular Immunology Section.

The study team for the Phase 2 trial enrolled 369 healthy, non-pregnant adults aged 18 to 55 years in the rural communities of Kalifabougou and Torodo in Mali, where intense P. falciparum transmission typically occurs from July through December each year.

The first part of the trial assessed the safety of three different doses of CIS43LS — 5 milligrams per kilogram of body weight, 10 mg/kg and 40 mg/kg — administered by intravenous infusion in 18 study participants, with six participants per dose level. The study team followed these participants for 24 weeks and found the antibody infusions were safe and well-tolerated.

The second part of the trial assessed the efficacy of two different doses of CIS43LS compared to a placebo. Three hundred and thirty participants were assigned at random to receive either 10 mg/kg of the antibody, 40 mg/kg, or a placebo by intravenous infusion. No one knew who was assigned to which group until the end of the trial. The study team followed these individuals for 24 weeks, testing their blood for P. falciparum weekly for the first 28 days and every two weeks thereafter. Any participant who developed symptomatic malaria during the trial received standard treatment from the study team.

“These first field results demonstrating that a monoclonal antibody safely provides high-level protection against intense malaria transmission in healthy adults pave the way for further studies to determine if such an intervention can prevent malaria infection in infants, children, and pregnant women,” Dr. Seder said. “We hope monoclonal antibodies will transform malaria prevention in endemic regions.”

Dr. Seder and colleagues have developed a second antimalarial monoclonal antibody, L9LS, that is much more potent than CIS43LS and therefore can be administered in a smaller dose as an injection under the skin (subcutaneously), rather than by intravenous infusion. An early-phase NIAID trial of L9LS in the United States found that the antibody was safe and prevented malaria infection for 21 days in 15 out of 17 healthy adults exposed to P. falciparum in a carefully controlled setting. Two larger, NIAID-sponsored Phase 2 trials assessing the safety and efficacy of L9LS in infants, children and adults are underway in Mali and Kenya.

Additional information about the Phase 2 trial of CIS43LS is available at ClinicalTrials.gov under study identifier NCT04329104.

NIAID conducts and supports research—at NIH, throughout the United States, and worldwide—to study the causes of infectious and immune-mediated diseases, and to develop better means of preventing, diagnosing and treating these illnesses. News releases, fact sheets and other NIAID-related materials are available on the NIAID website.

About the National Institutes of Health (NIH): NIH, the nation's medical research agency, includes 27 Institutes and Centers and is a component of the U.S. Department of Health and Human Services. NIH is the primary federal agency conducting and supporting basic, clinical, and translational medical research, and is investigating the causes, treatments, and cures for both common and rare diseases. For more information about NIH and its programs, visit www.nih.gov.