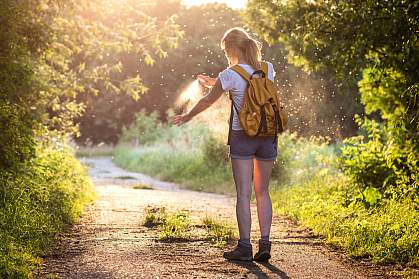 Researchers are gaining a better understanding of why mosquitoes are more attracted to some people than others.encierro / Shutterstock

Every family or group of friends seems to have one: a person that mosquitoes flock to, even if they’re surrounded by others that the bugs could potentially bite. What makes certain people mosquito magnets remains poorly understood.

Better knowledge of why some people are more attractive to mosquitoes could lead to new ways to prevent mosquito bites. In turn, this could help prevent mosquito-borne illnesses, which sicken hundreds of millions of people worldwide each year, leading to hundreds of thousands of deaths.

An NIH-funded research team led by Drs. Maria Elena De Obaldia and Leslie Vosshall from the Rockefeller University and the Howard Hughes Medical Institute performed a study to identify skin compounds that attract Aedes aegypti mosquitoes, which spread the viruses that cause dengue, yellow fever, and Zika. Sixty-four volunteers wore nylon sleeves on their arms for six hours. These were then collected and compared for their ability to draw the bugs. Results were published on October 27, 2022, in Cell.

Mosquitoes use four types of molecules called co-receptors to help detect odors. The researchers performed a set of experiments where they eliminated these co-receptors in different groups of mosquitoes. For three of the co-receptors, removal of each decreased the general interest of the mosquitoes in human odors. However, the mosquitoes could still distinguish between the most and least attractive people.

These three co-receptors are involved in sensing acidic compounds on human skin. So, the researchers focused further on those molecules. Using a technique called mass spectrometry, they found that carboxylic acids—a type of fatty acid—were heavily enriched in the skin of the most attractive volunteers.

Similar results were seen in samples taken from two independent groups of volunteers. And the levels of these carboxylic acids remained stable in skin for a year or more, regardless of changing environmental conditions.

“Some subjects were in the study for several years, and we saw that if they were a mosquito magnet, they remained a mosquito magnet,” De Obaldia says. “Many things could have changed about the subject or their behaviors over that time, but this was a very stable property of the person.”

The study could not show whether high levels of carboxylic acids were directly driving mosquito preference, only that they were associated with attractiveness to the bugs. Among highly attractive people, the specific blends of these compounds differed. And notably, one person with high levels of all the carboxylic acids examined did not attract mosquitoes. More work is needed to better understand how these and other compounds interact to attract or repel mosquitoes, and whether they could be manipulated to prevent mosquito bites.