China’s capital city still has a higher research output, but its innovating second city is catching up.

Jing Qu’s lab at the Chinese Academy of Sciences’ (CAS) Institute of Zoology researches the cellular causes of ageing, developing stem-cell and gene therapies to treat diseases such as osteoarthritis. Qu was drawn to CAS, which she joined in 2012 after leaving the Salk Institute for Biological Studies in San Diego, California, because of its generous funding, its leading role in China’s stem-cell research, and the opportunity to conduct biomedical research in non-human primates.

With a grant from China’s Ministry of Science and Technology and more from the National Natural Science Foundation of China, a state-affiliated research funder, Qu’s Beijing-based team is looking for ageing markers in the organs of crab-eating macaques (Macaca fascicularis). “Monkeys are much more similar to humans, genetically and anatomically” than more commonly used animals for research, such as rodents, “so they are a better animal model for biology research”, says Qu. “Rodents don’t always show the same phenotypes as humans, but we see a very similar ageing pattern in monkeys.”

Along with many others, Qu’s move back to China from the United States is helping to boost leading Chinese institutions, and the cities where they are based, as centres of research excellence. Beijing continues to rank as the leading science city in the Nature Index, which tracks research output in 82 selected natural-sciences journals. The city gained its position in 2016, overtaking the New York Metropolitan Area, as China’s long-term goal to rival the United States scientifically began to bear fruit. Other Chinese cities are joining the fray: Shanghai ranks third, overtaking the Boston Metropolitan Area in Massachusetts, and San Francisco Bay Area, California, since the last Science Cities analysis in 2021. New York remains second.

Beijing and Shanghai’s rapid increase in output is driven by central and local governments’ commitment in making them innovation-driven science centres. Greatly increased funding in research and development (R&D) has encouraged collaboration with international partners, drawing much talent.

Together, the cities host dozens of elite universities and research institutes that are talent magnets, says Denis Simon, a China technology specialist at Duke University in Durham, North Carolina. They boast 5 of the leading 50 institutions worldwide in the Nature Index, as measured by its key metric, Share — a fractional count of articles that takes into account the proportion of authors affiliated with an institution or location. Beijing also has 8 of the 39 universities selected by Project 985, an initiative started in 1998 to create world-class institutions through a huge funding boost, and Shanghai has four. CAS has 38 institutions in Beijing and 15 in Shanghai.

“Prestigious schools like the 985 universities provide good technology platforms and instruments,” says Xuefeng Jiang, a chemist at East China Normal University in Shanghai, one of the city’s Project 985 institutions. Jiang’s career journey mirrors Qu’s. In 2011, after finishing his postdoctoral programme at Scripps Research in San Diego, California, Jiang was determined to join a 985 university.

“Having the hardware and resources ready upon joining means we can immediately start working on our research without having to source and set up new equipment,” he says. 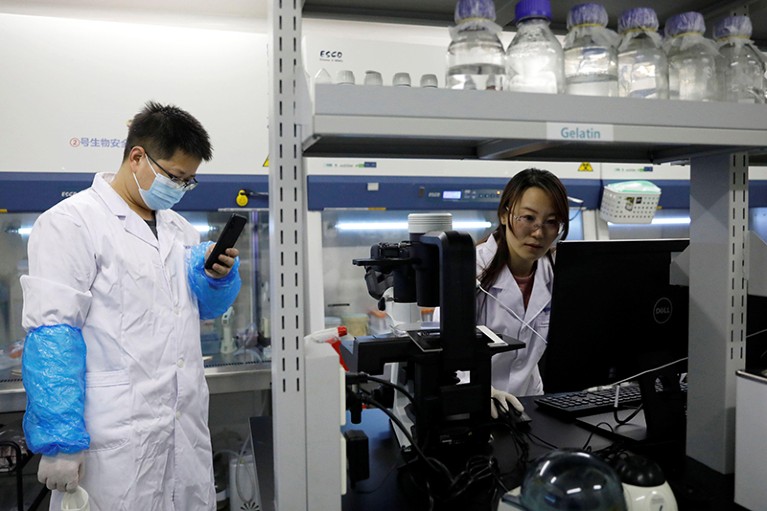 These elite institutions oversee most of China’s top scientific instruments. For example, the Five-hundred-metre Aperture Spherical Telescope, in southwestern Guizhou, is run by CAS’s National Astronomical Observatory in Beijing. One of the newest facilities is the cosmic ray detector — the Large High Altitude Air Shower Observatory (LHAASO) — in southwestern Sichuan run by CAS’s Institute of High Energy Physics, also in Beijing.

Such investment “will inevitably lead to a high level of scientific output”, says Min Zha, an astrophysicist at the Institute of High Energy Physics in Beijing and a member of the LHAASO team. Zha joined the institute in 2005 after working at the University of Leeds, UK, as a postdoctoral researcher. At the time, particle astrophysics in China was still trying to catch up with more advanced countries in the field. But with a highly sensitive detector, which has yielded findings on the origin of cosmic rays, China has become competitive internationally, Zha says. The Nature Index shows that Beijing leads the world in high-quality output in the field of physical sciences, ahead of Shanghai and Boston in second and third.

In addition to resources available at the 985 universities, Jiang was drawn to Shanghai for its strong links between academia and industry.

The Zhangjiang Science City in suburban Shanghai, for example, boasts one of the country’s most established biotechnology hubs. The region, formerly known as the Zhangjiang High-Tech Park, began operations in 1992. Since then, the municipal and central governments have continued to expand the region, and the science city is now home to more than 18,000 companies and 440 R&D institutions. Several of the world’s largest pharmaceutical firms, such as AstraZeneca and Roche, have set up R&D centres at the Zhangjiang Pharma Valley founded in 1994. Jiang, who designs sulfur-containing compounds with applications from material synthesis to drug development, collaborates with companies in cities in the neighbouring provinces of Zhejiang and Jiangsu, which form the Yangtze River Delta Economic Zone with Shanghai. Industry colleagues around the city are a source of valuable feedback to academic research partners, Jiang says. These companies also bring a large number of employment opportunities, he adds, which attract the next generation of researchers to the region.

“Chemistry is a field that can really benefit from industry feedback,” Jiang says. “For us in academia, we need to test our ideas, and market demands also guide our research.”

Beijing has similar industry clusters. These include the Zhongguancun Science Park, China’s first high-tech park. The park is home to dozens of universities including Tsinghua University and CAS’s institutions. It also boasts around 300 R&D centres of multinational corporations. R&D in Beijing and Shanghai benefits from such an agglomeration effect, in which industry, universities and government institutions such as CAS cluster and interact with each other to form a feedback loop, says Caroline Wagner Dr. Caroline Wagner , a science policy researcher at Ohio State University in Columbus. This feedback system can accelerate scientific knowledge creation and pushes research more and more towards the frontiers of science.

As the research breaks new ground, the scientists in these cities have also sought to increase their global collaboration. This forging of links outside China has been accelerated by the millions of students and scientists who have sought scientific experience abroad since the 1980s. Many of them stay abroad, but collaborate with peers back home.

However, an increasing number of students and scientists have been returning in recent years. For instance, the number of returning Chinese graduates as a proportion of students leaving to study overseas increased from 55% in 2011 to nearly 80% in 2016, according to official government figures. Meanwhile, most of the returning scholars are choosing Beijing and Shanghai as their destinations, Simon says. The trend is partly driven by the cities’ growing research capacity, but also a result of government efforts to lure scientists by offering them competitive pay and the promise of their own labs, he adds. Many of those returning also maintain collaborative relationships with their former colleagues.

Climate scientist Zhu Liu returned to China in 2018 after his postdoctoral programmes at Harvard University in Cambridge, Massachusetts, and the California Institute of Technology in Pasadena. Now at Tsinghua University, Liu continues to collaborate with researchers at these institutions, as well as colleagues in Japan and France, to develop the international Carbon Monitor data set. The tool launched in 2019 and uses real-time data to monitor CO2emissions from global fossil-fuel combustion and cement production with near-global coverage, including COVID-19 pandemic impacts. The international team hopes the monitor will be a more efficient system for quantifying global CO2 emissions in near-real-time.

The collaborative relationship means they can share resources. Liu, for instance, is using satellite data from his collaborators in the United States. “Problems like climate change should be a global effort, so it’s important to stay connected with peers in other countries.”

Despite the importance of such relationships, Wagner and other researchers have, in the past year, found evidence of China’s international research collaboration with the United States coming under pressure. Wagner says that the pandemic’s travel restrictions had clearly played a part given “we know that as much as 90% of international collaborations begin face-to-face”. But significantly, research from Wagner, co-authored in a preprint with Xiaojing Cai at Yangzhou University in China (C. S. Wagner and X. Cai Preprint at arXiv ; 2022) has also suggested that US–China collaboration as a proportion of global research output began falling — from a peak of around 10% of all internationally co-authored research — before the pandemic. Given the share of global output co-authored between scientists in China and the European Union has continued to increase, this points to political issues, such as US-led investigations into research collaborations with China, having an impact, the authors say.

It is maybe too early to assess whether any damage done to US–China collaboration is feeding into city performance, but it will be an important trend to watch. One consideration may be whether fraying links between the countries will make it harder for cities such as Beijing and Shanghai to close the gap in life sciences, the area covered by the Nature Index where leading US science cities still have the edge. Beijing is fifth for Share in life sciences, behind four American cities — New York, Boston, the San Francisco Bay Area and Baltimore-Washington — and Shanghai is seventh.

Among the reasons for China’s lag in life sciences was an emphasis on fields related to industrialization after the People’s Republic of China was founded in 1949, according to an article co-authored by Qu and published in April (J. Chen et al. Bull. Chin. Acad. Sci. 37, 308–316; 2022). The country’s research in this area accelerated years later than in more developed countries.

However, the central and provincial-level governments are shifting focus and increasing investments. In 2011, the central government listed biotechnology as a development priority in its five-year policy blueprint. And in the guideline for 2021 to 2025, the government plans to further develop its ‘bioeconomy’ that includes health care and agriculture.

Catching up in life sciences

In 2021, the Shanghai government also announced plans to expand the industry cluster in Zhangjiang and build the city into an “internationally influential innovation centre” in biomedicine. The pledge includes various measures that encourage R&D, including offering up to 30 million yuan (US$4.3 million) in subsidy for developing new drugs locally.

China clearly has ambitions in life sciences, Simon says. Bringing biologists such as Yigong Shi, previously a professor in molecular biology at Princeton University, and Yi Rao, who held a professorship at Northwestern University’s Feinberg School of Medicine, back to the country shows that “the leadership is there to understand what China has to do to catch up in these areas”, he adds.

“China’s research has grown greatly,” Qu says. “Many scientists, including myself, think opportunities in China are the same or better than those abroad. Having good teachers in these places also means we’ll cultivate students who can push the field forward.”